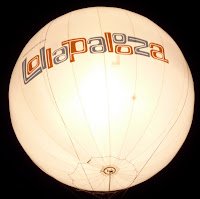 When I went to Chicago for my very 1st time for NYE 2011, I loved it SO very much that I vowed I’d be back as soon as possible. My friends informed me Lollapalooza’s 20th anniversary was coming up so, by January 1st 2011, I had already decided I was definitely travelling back to Chitown in August. By early February, I’d already booked my flights from LA to Chicago &, the moment Lollapalooza 2011 tickets went on sale, I immediately ordered my 3-day pass. I was excitedly awaiting August 5th through the 7th for over 7 months &, after just returning from Chicago late Monday night, I can say, without a doubt, that Lollapalooza 2011 exceeded all of my expectations & more. It was, as my dear friend Sarah (who’s currently & temporarily residing in Chicago) so often says, AMAZEBALLS.

After accidentally getting to LAX 2 hours early only to end up with my flight an hour delayed (I generally prefer to push my airport arrivals to the very last minute in order to keep things interesting), I didn’t get to Midway Airport in Chicago until 12:30am on Thursday night/Friday morning. Since all my friends who live in the city either don’t have cars OR have cars but don’t drive them, I was forced to splurge on a $50 cab ride to my friend’s apartment near Wrigley Field.

It’d been a long day but I was still on Pacific Time so I didn’t fall asleep until ~4am which led to me sleeping in until almost noon on Friday! There was no way I was going to catch The Naked & Famous' set at 1:30pm on Day 1 but I was OK with that because I rarely make the 1st act I want to see each day at a festival. I knew I'd for sure get into Grant Park before Foster The People started at 3pm &, since FTP were my 1st MUST SEE band of the weekend, I wasn't too concerned about missing The Naked & Famous (ALTHOUGH I did hear they were really good so they've now secured a top spot on my current to-see list). 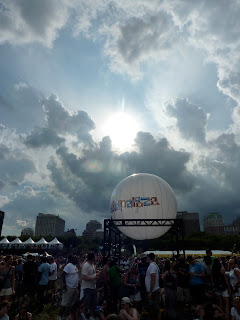 After walking only 1/3 of a mile from my friend's apartment to the train station, I quickly & easily caught the L Line straight to Grant Park. I was a little bummed to be cruising to the fest alone since most of my Chicago friends had to work on Friday but the only reason that bothered me was because I didn't have a festival crew to preparty with. Luckily, I knew several different groups of people were also going to be at Day 1 so that meant I had people to meet up with once I arrived. I don't mind being alone at a festival here & there as long as I know I'm not going to be alone the WHOLE time. It's actually kind of nice to occasionally be on my own because then I can stage hop as much as I want & I don't have to cater to anyone else's needs except my own. I tend to be a little selfish at music festivals but I always try to warn everyone ahead of time so no one thinks I'm a bitch...hopefully ;-) 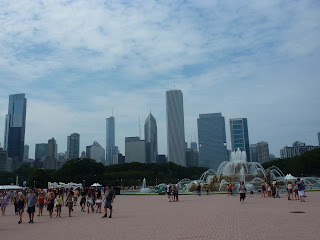 But I digress...within 10 minutes of walking through the festival's main entrance on Friday, I managed to find my friend Tucker from LA next to the big, beautiful fountain situated smack dab in the middle of Grant Park. From there, we walked over to Foster The People's stage & posted up for about 15 minutes before FTP started their set right on time at 3pm. My 1st Lollapalooza experience was officially underway. 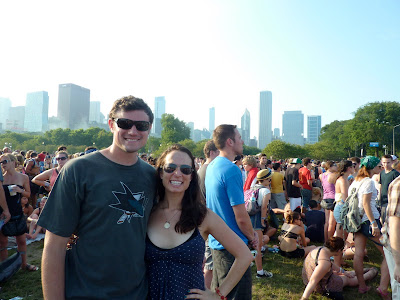 Now, I could go on forever about everything I loved about Lollapalooza 2011 but, since I took SO many photos & videos, I figure those will pretty much speak for themselves. In a nutshell though, some of my favorite parts of the festival included the breathtaking city views, the music (obviously), all the AMAZING gourmet food provided by the uber famous chef Graham Eliot (the lobster corn dog was to die for!), getting caught in not one but TWO torrential downpours on Sunday (& still managing to save both my phone AND my camera!), watching everyone play in the mud & stare at rainbows after the rain, etc, etc.

Some of the best acts of the weekend included The Kills (I <3 Alison Mosshart SO much! She is SUCH a badass!), A Perfect Circle, Afrojack, Muse, Coldplay (they were awesome...there, I said it), Local Natives, Ween, Lykke Li, Atmosphere, MY MORNING JACKET (who played on the main stage with THE most beautiful city skyline backdrop & BLEW MY MIND for the 7th time...tying LCD Soundsystem for the most times I've ever seen one artist), Arctic Monkeys, Modeselektor, Deadmua5 & Kid Cudi.


MY MORNING JACKET - One Big Holiday


Portugal, The Man...as the storm was building... 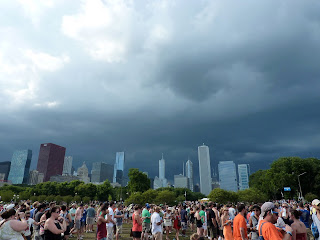 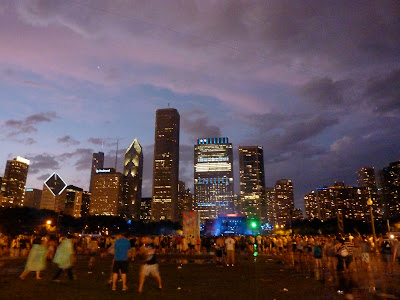 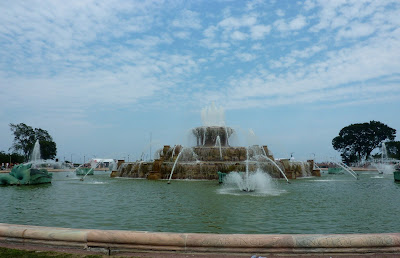 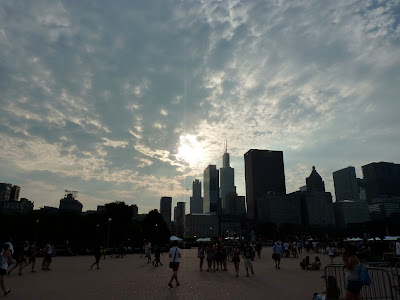 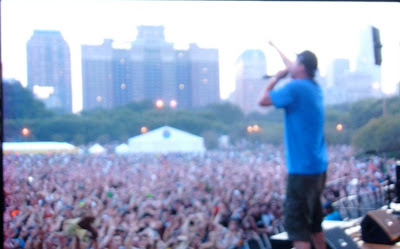 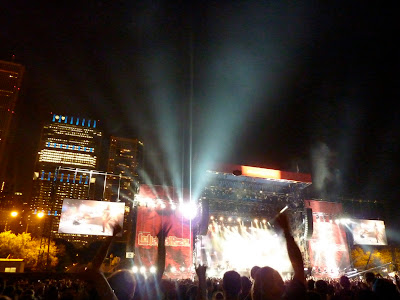 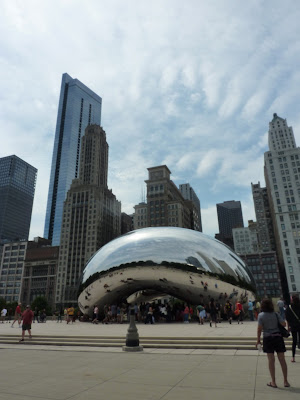