The 2013 Treasure Island Music Festival Lineup is f*ckin RAD so...I'm going to attend the island fest for my 1st time ever! I JUST bought my 2-day pass! Tix went on sale this morning at 10am. Get yours before they sell out! 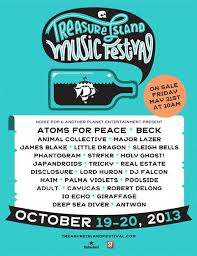 Do It Again by Holy Ghost! = Sasquatch 2013 Rally Anthem

Not only was Holy Ghost!'s Saturday evening set at Sasquatch 1 of the most fun dance parties of the 4-day weekend but it also provided my BADASS camping crew with our official rally anthem for days 3 & 4 of the fest. We d-d-d-did it again!!


Lose Yourself To Dance featuring Pharrell 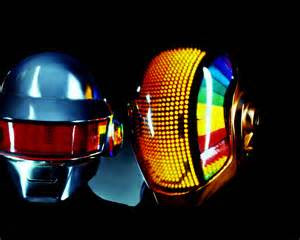 I can't wait to dance my ass off to this new Holy Ghost! track live at Sasquatch this weekend!

I Saw You From The Lifeboat by Liars (NEW!!!)

Knights of Shame by AWOLNATION

Janelle Monáe's music videos are so much fun. And Erykah Badu is 1 bad ass chick playing Badoula Oblongata in the official video for Q.U.E.E.N., the 1st single off Monáe's upcoming new album, The Electric Lady. Monáe is SO talented. I'm ready for more from her!! 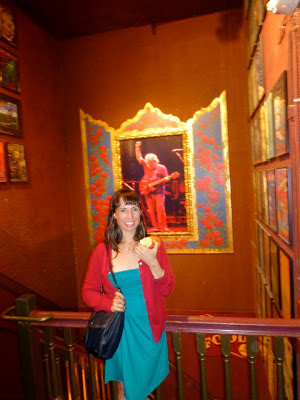 I've raved countless times about Jim James, the lead singer of My Morning Jacket (the band I've seen more than any other...I'm at 11x right now but will soon hit 12x when I see MMJ, Wilco, Bob Dylan & Ryan Bingham in Irvine on 8/3!) so, instead of reiterating my undying love for this unbelievably talented man with 1 of the most beautiful voices I've ever heard, I'm simply going to say I had THE best time at my 1st Fillmore show EVER on Sunday night in SF!! What an INCREDIBLE venue!!!

For years, I've been wanting to see a show at the Fillmore primarily because my father saved tons of advertisement postcards he received from the Fillmore in the late 60s & early 70s (see photo immediately below) & I've always been in awe of cool they were. He has everything from The Grateful Dead to Jefferson Airplane to Jimi Hendrix to Fleetwood Mac! I've also always been so proud to be able to say my dad went to a lot of those shows! 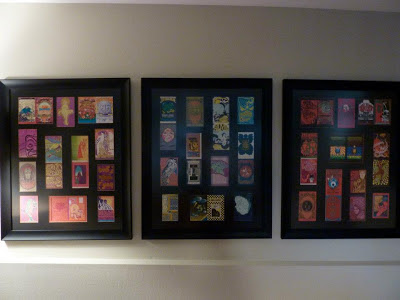 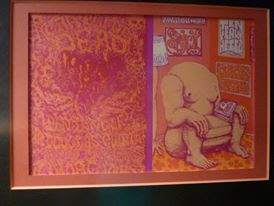 So, because I was already going to be up in the Bay Area for both my niece's 2nd birthday party & Mother's Day (& because I'd have to miss Jim's LA show on Saturday night since I'd be in SF), I couldn't have been happier to learn Jim was playing The Fillmore Sunday night which meant, as long as I was willing to deal with getting up at 4am to catch a 6am flight from SFO back to LA (which I was!), at long last, I'd FINALLY get to attend a concert at The Fillmore! It was just icing on the cake that my 1st Fillmore show ever was the lead singer of my FAVORITE live band performing music off his 1st solo album :)

Everything about the evening (JIM, the venue, the apples, the framed Fillmore concert posters hanging EVERYWHERE, the free concert poster I was given because they give away FREE posters when a show sells out, the beautiful chandeliers, the ambience, my good friends Rachel & Seth being there with me, the flowing whiskey & the overall vibe) was PURE PERFECTION. 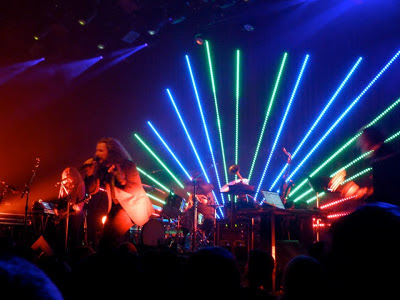 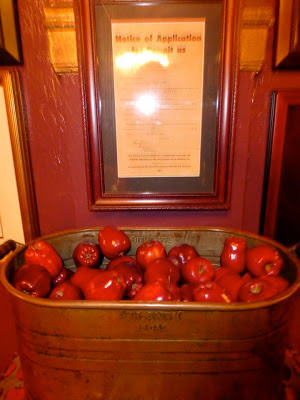 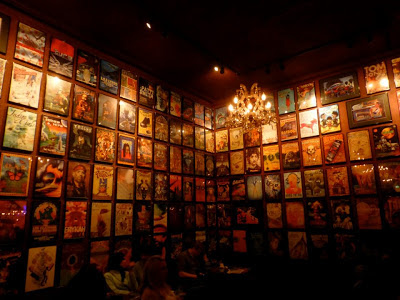 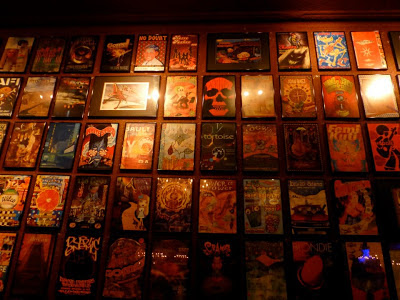 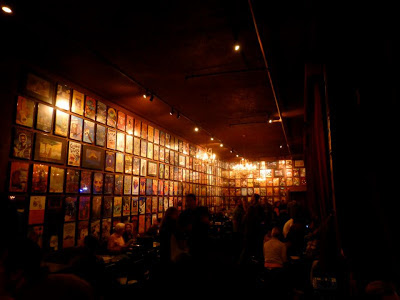 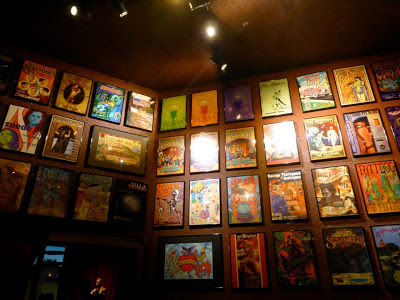 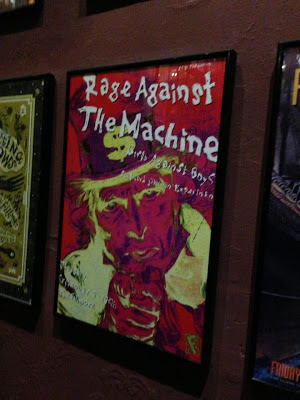 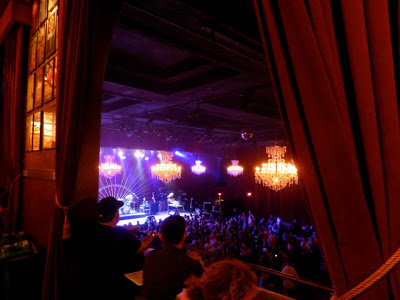 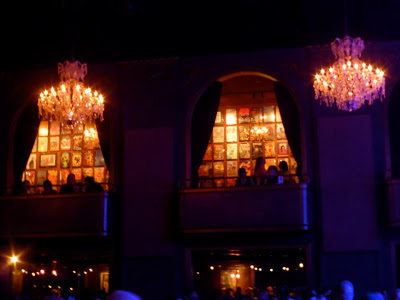 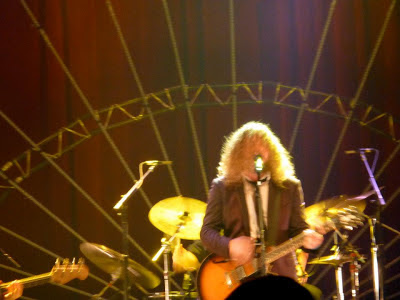 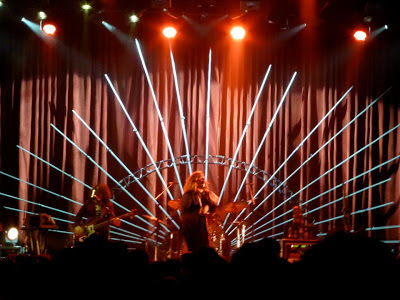 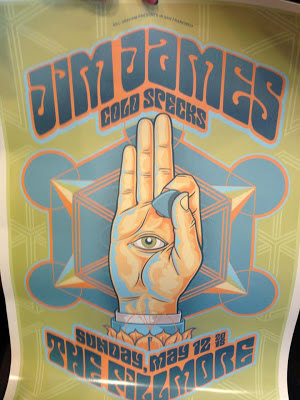 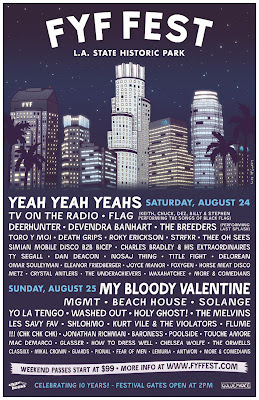 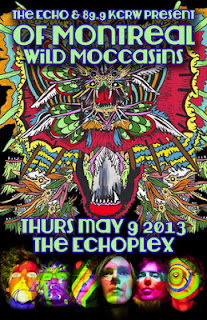 I don't know how it is that I never saw an of Montreal show before last night but I'm now SO happy I finally saw them live! This wacky band from Athens, Georgia puts on 1 of THE most tripped out & FUN shows I've ever seen! My concert buddy compared them to an odd mix of The Flaming Lips & Dr. Dog which is a fairly accurate description.

Last night's show featured costumed characters dancing around the stage & riding around on each other's shoulders plus miscellaneous weirdos in face-masked unitards jumping out into the audience & crowd surfing. They're theatrical to say the least.

And, antics aside, of Montreal's music is very unusual & awesome. Their lyrics, album titles & song titles are all super descriptive, odd & amusing. of Montreal is definitely a band you need to see live to truly be able to appreciate their art & creativity. I highly recommend seeing them the next chance you get! 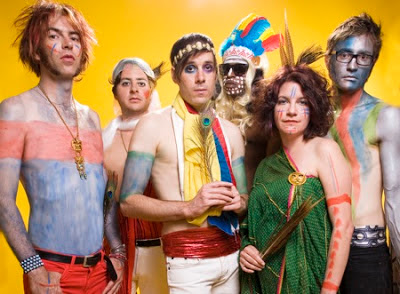 Earthquake by Deerhunter ('cuz we just had an earthquake)

The earthquake we JUST had reminded me of 2 things:

1 - I love this Deerhunter track entitled Earthquake
2 - I still need to listen to the new Deerhunter album!!

Between Two Ferns/Spring Break Anthem by The Lonely Island

I'm unnecessarily excited for The Lonely Island to release their new album The Wack Album, along with (I assume/hope) many new & hilariously fabulous videos, on 6/11/13!! 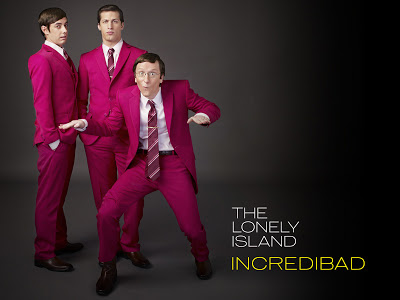 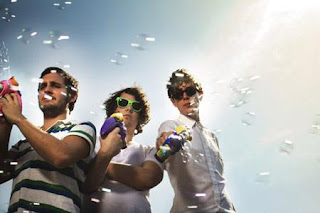 I can't think of a better way to have gotten acquainted with material off Born Ruffians' new album Birthmarks (just recently released on 4/16/13) than seeing the Canadian band perform MANY of their new tracks live at Troubadour in West Hollywood last night.

It was my 1st Born Ruffians show but it most certainly won't be my last. Their energy level is off the charts & their fans simply adore them! The fans also adore singing along to all their favorite songs. There were a few moments when the band wouldn't need to sing at all because the crowd totally had it covered :)

String Theory played strings attached to the ROOF of a neighboring building at Eclectic Music Festival in South Pasadena on Saturday afternoon & it was awesome.

Since I hurt myself yesterday (boo!) but am getting to see Nine Inch Nails for my 2nd time ever this August at Outside Lands in SF (yay!), this is my theme song today. 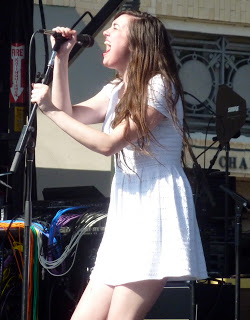 Check out the 2013 lineup that was just announced today (& please note there are rumors that another big act will still be added later) & get your ass out to Pasadena on 6/1! Then after party with me, !!! & White Arrows at El Rey!!!

Helium For A Dream by andSomeone

"RELEASED TODAY! Our new single “Helium For A Dream”, which also took home two awards Sunday night. Please support by heading to https://itunes.apple.com/us/album/helium-for-a-dream-single/id636210156 and spending a buck to help spread the music and keep us being able to make it. Thanks for all!" - andSomeone