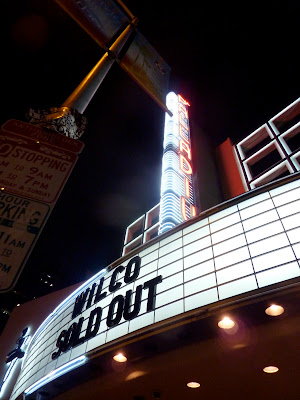 I learned something on Tuesday night I had never really realized before & that is the fact people who say they like Wilco fuckin LOOOVE Wilco &, until I saw Wilco's show last night at The Hollywood Palladium, I didn't fully understand why. Now? I get it & I, too, fuckin LOOOVE Wilco!!

Even though Wilco has been around for about 20 years & has a TON of fans who have remained loyal to them decade after decade, I personally never really knew much of their material until I found out they were going to be headlining Day 4 of Sasquatch 2011 & I started doing a little research. I liked what I heard. Then I watched the 2002 Wilco documentary I Am Trying To Break Your Heart & I suddenly got super excited to finally see this world famous band I'd always heard so much about.

On Memorial Day 2011, I saw Wilco for my 1st time at The Gorge in George, Washington & I REALLY enjoyed their entire set but I didn't decide I officially love them until this past Tuesday night. I felt like I was a legitimate fan this time. I had a couple favorite songs I recognized & I even knew a few lyrics! It felt nice :-) 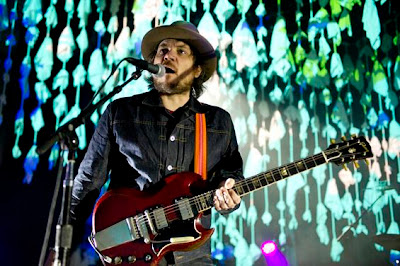 The only bummer of the evening was, per the band's request, security forced me to check my camera in the coat check room when I entered the Palladium because cameras & other filming devices weren't allowed (although they didn't take anyone's phone so that just meant the only footage captured would most likely be kinda shitty...but whatever!). I had parked WAY too far to go back to lock my camera in my car & the band was just about to start their 2 hour & 15 minute set when I was going through the security line so I just bit the bullet, paid $2 to reluctantly give up my camera & took my memory card with me for safekeeping. I felt naked but I survived. It was actually kind of liberating to be totally unable to record a single video or take a single photo because then I was able focus 100% of my attention on the show & the experience & both were INCREDIBLE.
Now I get it. Wilco is fantastic live & Jeff Tweedy is the man. He's got an incredibly unique & soothing voice & pretty much everything he says to the audience between songs is straight-up HILARIOUS. He does these little comedic bits & it's like he's acting as his own MC. I <3 Jeff Tweedy!!